Now that’s a happy-to-see-you breakfast. Cuz there’s a face in there. See it? Two eggy eyes, a toast nose, and a frying pan smile. Yeah, now you see it. Youuuu’re wellllcoooommmeeee. That’s whale for “you’re welcome”. Finding Dory, anyone? Ok moving on.

I’m noticing that I seem to write most on snow days. Newsflash: New England is having another one. Husband and I are both working from home which means we’re refereeing the rodeo that is two cats and a toddler. Daycare is closed due to the weather and she couldn’t go anyway because she’s got pinkeye and the pharmacy ran out of the prescription eye drops for such things. (Side note: Seriously? How many people in our town could possibly have pinkeye right now!) Toddler is running around yelling “MINE”and “HIIII” and trying to press all the buttons on everything, and the two cats are meowing through my conference call and sitting on the phone/laptop. Typical sitcom material. My household wins the participation award, whether it’s wanted or not.

Before all hell broke loose, husband and I did manage to have one calm cup of coffee together on the couch while the snow was just starting to drift down in gentle waves. Toddler was balancing on her belly on the back of the couch, nose and fingertip pressed against the glass making little foggy imprints, her pacifier-muffled voice chirping “I see it!” and “Truck!” in anticipation of the snow plows that’ll be by later. It was really, really, really nice you guys.

But back to the food stuff. Egg in a basket is a staple in our house because it’s easy, it’s fast, and it’s eggs and toast all in one. With cheese. There’s no way to go wrong. Pair it with some hash and orange slices and you’re golden my friend.

It’s easy: Melt some butter in a fry pan, cut a hole in some bread, crack an egg into the hole, fry for a bit, flip over, fry some more, and top with cheese. DONE. EASY. EGGS. BREAD. CHEESE. BUTTER. holy hell my 4th cup of coffee just kicked in. 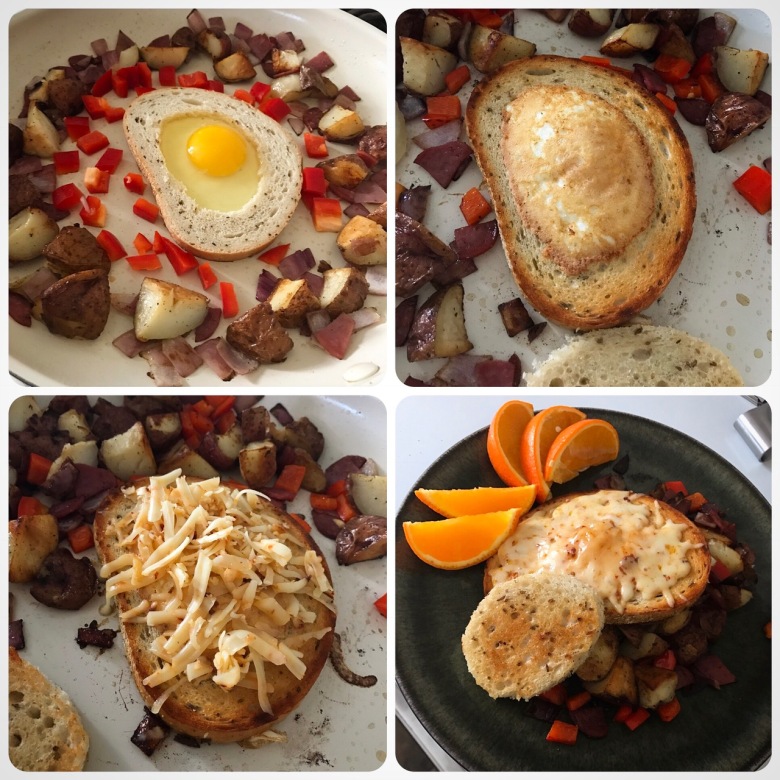 This time I had leftover potatoes so I made a quick hash in the pan while I made the egg in a hole.  Leftover roasted potatoes cut hash prep time by a lot, so you can just add those, some chopped onion, pepper, and a meat of some kind to the pan before frying the eggs up and call it hash.  It’s really not rocket science, which is sort of the nice thing about breakfast food. You can be half asleep and still make a bomb ass breakfast. Words to live by, my friends. Over and out.